Kenneth Warner, Benjamin’s father was a huge influence on his decision to approach abstract work, what started as a collaboration of surfaces has flourished into a huge part of Benjamin’s own artistic practice. In February 2018, Beside the Wave exhibited a collection of abstract paintings by Warner for the very first time across both gallery spaces; the collection received much admiration from collectors old and new.

Benjamin Warner’s abstract paintings are a powerful combination of highly worked surfaces and clever composition which both indicate an almost Abstract Expressionist intention, as well as a constructivist understanding of shape and form. With an innate comprehension of the visual identity of how a painting works, these abstract paintings masterfully adhere to the golden ration. The Golden Ratio has been used as a powerful composition tool for centuries, hailed as ‘the perfect number’, it can assist in creating images that have a strong effect. Benjamin uses this tool as a way of allowing compositional components to speak for themselves and push geometric shapes in and out of focus for the viewer. By using geometric forms but slightly blurring their edges and keeping shapes loose, Benjamin achieves a sense of these floating forms existing across the picture plane. Judging when a piece is finished is a balancing act in the studio for Benjamin, he often leaves paintings for months before returning and finishing them. By achieving what he calls a ‘sense of rhythm and belonging’ this is the marker Benjamin strives for when finishing a piece. 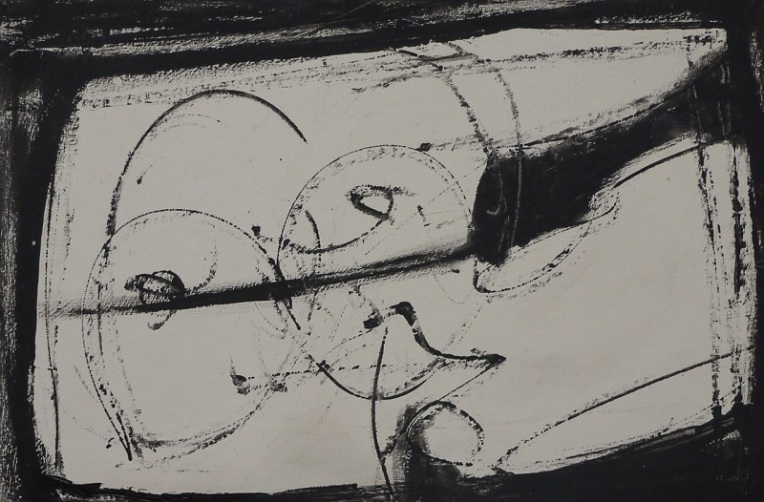 In terms of visual influences, Benjamin takes inspiration from his surroundings whether that is shapes he sees on television programmes or how something is pulled together in landscape. His starting points are incredibly varied but there is always a moment where the painting begins to dictate itself and move away from the original starting point. Not only do their elemental construction reference a formalist approach to painting, Benjamin’s abstracts take influence from the St. Ives artists working through the 1930s- especially Roger Hilton with his palette and then Patrick Heron with his shapes. With an emphasis on materiality, simple line and accentuated forms, both the St. Ives painters and Warner prioritise the construction of a painting as very much on show, there is no illusion and the painting becomes its own visual history with densely built layers of oils. 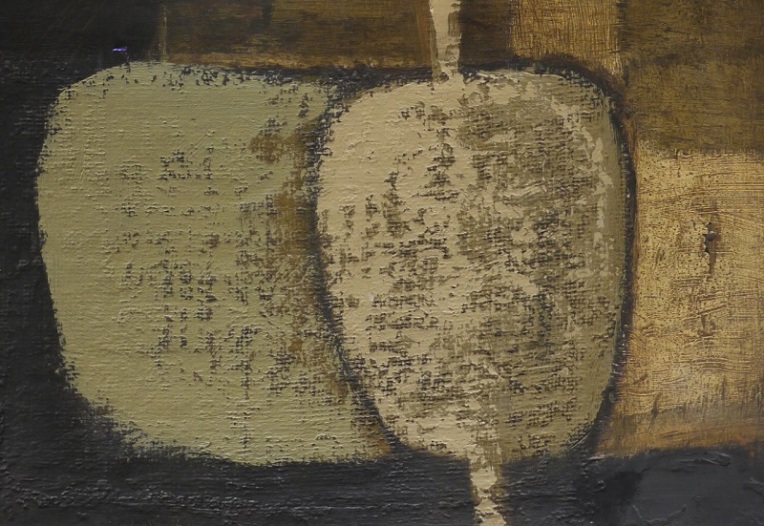 The roughened quality of not only the paint application but also surface material, allows Benjamin to produce paintings where there is a unification between artist and artwork. There is an implication that Warner works with the surface instead of dictatorially working on the surface which exposes a truly intuitive handling of medium. With both the act of painting and unpainting (removing), Warner’s work insists on a sense of longevity and timelessness which allows the viewer to experience the painting as an autonomous object- existing with its own essence. By often scraping layers of paint back, Benjamin’s work carries a trace or a ghost of what has gone before it therefore giving it a more impactful final effect. With the lack of concrete subject matter, the paintings could be deemed a surface level, modern creation; however, Warner does not disregard the historical codes and conventions of the painting model. In fact, he uses many tools such as impasto, colour theory and traditional application which reveal his complex understanding of the painting world. Through adapting these methods and tools slightly to his own approach and the removal of an obvious subject matter, Benjamin’s abstracts allow for a more sublime, emotional response. This is then often emphasised by the titling of the work, both constructed before and after a painting is made, the language Benjamin uses is both poetic and descriptive. Either derived from real place names or from an emotional experience, the titles act as a nudge in the right direction for the viewer rather than explicitly signposting-they give them an identity without dictating a prescriptive viewing.

Balance and tension are both present in these abstract pieces, with sliding forms buffering against one in another in slight tonal differences, the paintings ask the viewer to fill in the gaps with their own imagination and experience. Colour, although not vivid or primary, plays a strong role in Benjamin’s work as it acts as a vehicle to reference things in our surrounding world. By splitting composition through colour and line, Warner’s work also holds a textile quality, sharing characteristics with artists such as Sandra Blow with her woven like compositions in similar colours that profoundly blurred the lines between object and painting. Both Warner and Blow, use colour as a way of producing abstract, geometric pictures which emphasise patterns, tones and shapes found in the elemental world. Benjamin’s work shows a substantial comprehension of the need for varied pigmentation and saturation within a painting, he does this by using umbers and ochres across the background and middle ground which is then often dramatically altered with the interruption of a blue or orange gesture. With this combination of muted earth tones and an occasional vibrant insertion, Benjamin’s work can speak of the landscape he exists in, both urban and natural. There is also a balance between Warner’s abstract and representational work, each practice informs the other and allows Benjamin to move forward with both sets of paintings. The abstract work allows for a more in-depth experimentation and learning curve in terms of material and surface which then can be translated into the representational works, they keep each other fresh and exciting.

The idea that a piece of art can both reference the visual world we live in through abstract forms which we recognise, but also can avoid being too indicative of specificities and box viewers in, is not a new revelation. However, we believe abstract art has become even more relevant in our ever-changing world. With the over stimulation of visual imagery and an instantaneous culture, abstract art acts as the reminder that we can exist in a slower and more indefinite manner. Benjamin Warner’s work is an intense yet generous dialogue between colour and form, both of which are always rooted in him as a person and what he visually encounters in his everyday life. He is an artist of our time that is saving abstraction from a clinical or remote dynamic and is instead lurching it towards association and emotion.